The MAGNETIC Gallery is designed as a laboratory that explores the language of the Arts with urban influences and more distant inspirations, figurative or abstract, between spontaneity and
the search for perfection.
This running space invites you to discover the diversity of pictorial styles and creative processes to offer an exclusive panorama of a current movement.
Inaugurated in 2018, the gallery has established in Bordeaux as a center for the exhibition and promotion of contemporary aesthetics.

Stéphane Carricondo plunges us into the heart of his spontaneous and unadorned surveys. The artist shares with us his visions, his dreams embodied in his strange characters, masks, faces with atomic radiations which crystallize in geometric shapes. The figures that make up its attractive and original cosmogony seem to be inspired by a lost America where the fantastic beliefs of the Native Americans still float or from a hallucinated Africa made of fetishes, amulets, relics, talismans, totems and grays. -Gray. The spirits of the forest, the winds, the stars, the sky, the rivers and the sea are always present and the painter gives us proof of this with his aerosol spray shots.

Alejandro Gonzalez, better known as Mono Gonzalez, is a figure in Latin American mural history.
A militant artist, in the sixties he was one of the founding members of the BRP (Ramona Parra Brigade) which, with little means and generally in hiding, had the aim of making political propaganda through collective frescoes. Mono Gonzalez has become a benchmark in mural art. He is notably the author of the Life and Work fresco, which adorns the Parque Bustamante metro station in Santiago over more than 700 m2. In addition to being a teacher of municipal street graphics workshops, he travels the world in order to transmit his experience and his knowledge, during interventions and meetings around urban art, without ever stopping painting in the street. .

Semor is a French designer and muralist, he currently lives in Nantes. Drawing is at the center of his work. His studio research allows him to practice and
experiment with various supports and media. He takes advantage of the outdoors to offer large format images in public spaces. Semor transmits its energy and dynamism to service
images implanted in a unique context each time. His need for meetings and exchanges leads him to multiply artistic collaborations through projects in France as well as abroad.
With his distorted and labyrinthine universe, mixing figurative and abstract, his compositions are crossed by elements such as architecture, transport, nature, industry,
mechanisms … Influenced by the urban spectacle, he recounts situations that mix reality and fiction, through accumulation phenomena and offbeat scenes, populated by various characters and objects.
Semor offers mazes of images that are pretexts for various readings and call for reflection on our time. 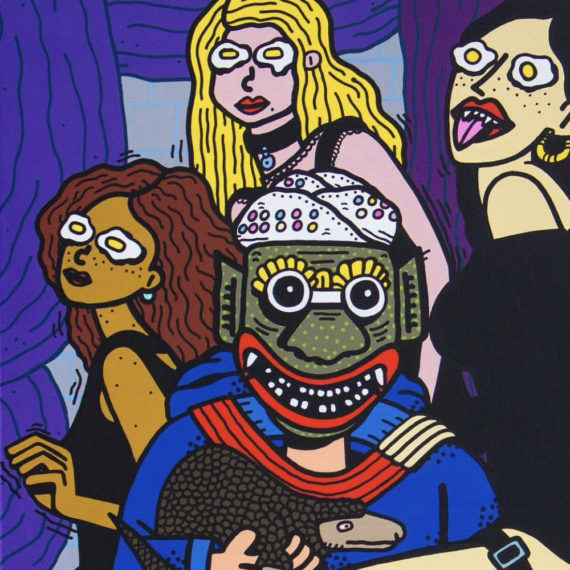